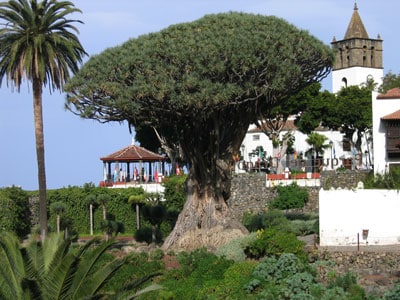 he well-known as Millenary Drago of Icod de los Vinos, to the north of the island of Tenerife (Canary Islands), is a huge specimen of drago (Dracaena draco) declared a National Monument in 1917. The dragon tree is a tree bearing plant belonging to the group of the Monocotiledoneas that has an anomalous secondary growth. It is therefore wrong to call it a “tree” [citation needed]. Currently it is the largest and longest known in the world in its kind. It measures about 18 meters high and has a perimeter at the base of a trunk of twenty meters and more than three hundred main branches. The flowers are small and numerous, they have 6 petals and many other stamens of creamy green or very pale yellow and clump together in striking inflorescences that protrude from the leaf set. It is estimated that in years of good flowering it can produce up to 1,500 bouquets of flowers. The trunk has a huge cavity that rises to 6 m. high, which is accessed by a door. In 1985, a deep cleaning was carried out and a fan was installed inside the trunk to facilitate air circulation and prevent fungal growth. In 1993, the City Council of Icod de los Vinos, at the proposal of the winning ideas contest architects convened in 1984, diverted the road that passed a few meters from the dragon tree, and fortunately, today, this vegetable symbol of the Canary Islands It is not in danger.