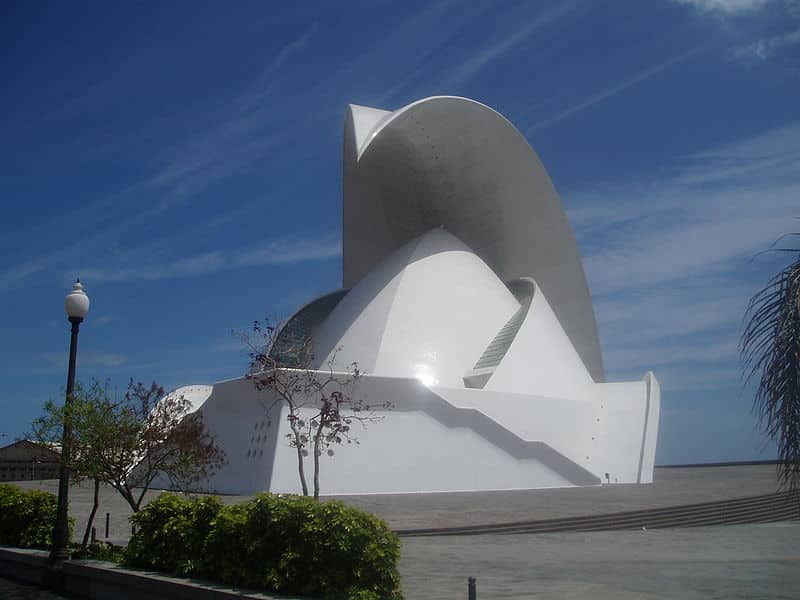 Its construction began in 1997 and ended in 2003, being inaugurated on September 26 of that year with the presence of Felipe de Borbón, Prince of Asturias, and was also visited by former United States President Bill Clinton.

The building is part of the post-modern architecture postulates of the late twentieth century. The Tenerife Auditorium is home to the Tenerife Symphony Orchestra.

The modern profile of the auditorium has led the Cabildo de Tenerife to consider it one of the most unique emblems of the city of Santa Cruz and the island of Tenerife. In addition, in March 2008, the Postal Service issued six stamps with the most emblematic works of Spanish architecture and included the auditorium due to its uniqueness. It is the most modern building in the Canary Islands and a tourist attraction of Tenerife.

The building stands on a plot of 23,000 m² of which the auditorium occupies 6,471 m², distributed in two rooms. The main hall or Symphony, crowned by a dome, has 1,616 seats in the amphitheater, as well as a stage with a mouthpiece 16.5 meters and a bottom of fourteen. Starting from the stage, the pipes of the organ designed by Albert Blancafort emerge on both sides of the armchair. The organ is based on a conception that is far from the traditional concept, seeking a surround sound as the sound sources are arranged around the listener.

For its part, the Chamber room reproduces the distribution in the amphitheater of the symphonic hall on a smaller scale and has 422 locations. In the lobby, which is accessed from two sides of the building, we can find the press room, a shop and a cafeteria. It also has a dozen individual dressing rooms and many other groups, as well as special locations for hairdressing, makeup, costumes, etc. In its exterior it has two terraces that lead to two squares from which the sea can be seen.